By means of doctoral research at the University of Brussels done by our head of assessment dr. David Pauwels in 2016, the importance of ‘Strategy’ has been asked to 105 professional Clubs spread over 35 countries in Europe (quantitative and qualitative study). Which standards regarding Strategy have a significant positive influence on the output of a talent development system?[1]

First, the research confirmed that defining a Strategy is revenue-independent. There was no significant relationship detected between the amount of Club revenue and the vision regarding talent development. This means that every professional Club should be able to create a strategic plan independent of their revenue level.

Choosing a certain Strategy requires analysis. An analysis of the specific market structure is advisable to come to a unique selling position. A regularly referenced approach in business literature to analyse the market structure is ‘the five competitive forces that shape Strategy’ developed by Porter (2008). But how do you create value for your Academy?

Several Technical Directors and CEOs in the research confirmed the importance of a value-creating Strategy. Creating value by means of unique resources (e.g. people, facilities) combined with in-depth capabilities (e.g. processes such as an implemented Football Philosophy). The role of the Senior management in converting all these valuable resources and capabilities into an optimal configuration for competitive advantage cannot be underestimated.

Having done your strategic analysis, the next step is goal setting. One of the main findings of the research was that a Club vision regarding talent development should be sustainable for several years to have impact. Without a long-term vision and the support of the Senior management, talent development will not reach his potential. Furthermore, a shared Club vision, having faith in talent development, and a clear pathway for talented players are crucial elements. The vision should be connected and concretised with clear goals and targets.

One interviewee highlighted that: “Without a strategic vision you have chaos, that is the basis of all. Every Club should start from a vision, what do you want to achieve, what is my core business, what kind of resources do you have, what are the common objectives?” 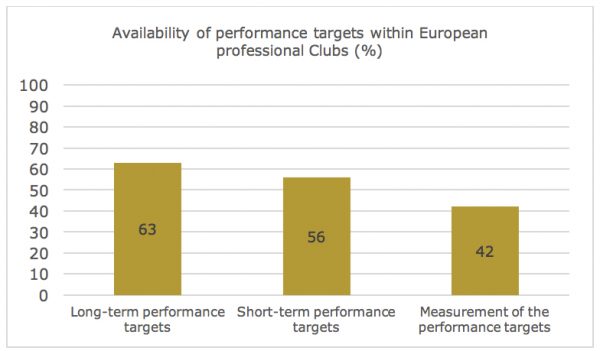 An interviewee explained the following: “Having a clear objective what we want to achieve together is vital. What are the expectations and requirements to fulfil to make the transition to the First Team? We have put this all together in our strategic plan … This is our new core business where we want to be in 2020 … our main KPI is to have at least 50% of our professional players of the Academy”

Finally, the implementation, measurement and monitoring of the performance targets is a crucial element and mostly neglected within Clubs (see Figure).

Share your thoughts with us about this article on info@doublepass.com.

[1]Output was measured by means of Club-trained players (% of squad members who played at least three seasons between the age of 15 and 21 for their employer Club) and Association-trained players (teams where footballers from the League surveyed played at least three seasons between the ages of 15 and 21). Clubs were also classified into different Club revenue levels (<10, 10-50, 50-100, 100-500 and >500 million euros). Club revenue consisted of domestic broadcasting, UEFA revenue, sponsorships, commercial incomes, gate receipts and other small revenues.