In the summer of 2017, Double Pass started a project with the Scottish Football Association (SFA). The SFA is the governing body of association football in Scotland. It organises and manages a performance based youth development programme for clubs in membership of the Scottish Professional Football League known as Club Academy Scotland.

The objective was to have a clear view on the Talent Development Systems of the clubs based on the Double Pass international and scientifically based model. Double Pass was asked to carry out an independent assessment of 10 elite clubs participating in the Club Academy Scotland / Project Brave initiatives of the SFA. Clubs had to go through a bidding process first, to be able to participate in the project. 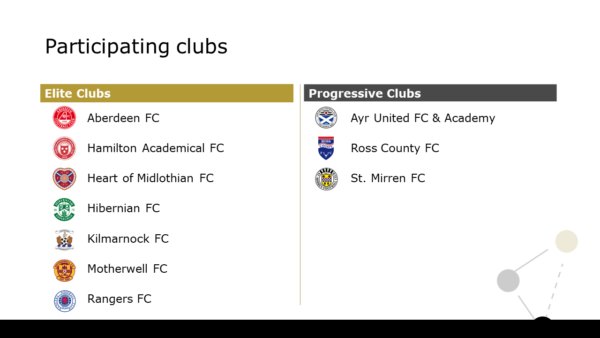 The first phase, from February 2017 until April 2017, consisted out of a consulting assignment including the review, revision and provision of amendments on the bidding document for clubs. The aim was to raise the minimal requirements and quality standards of the bid document of Club Academy Scotland.

The second phase, from August 2017 until June 2018 consisted out of the analysis of 10 elite youth academies who were accepted by the bidding process. A pre-analysis of the club’s Talent Development System was performed based on documents delivered by the club in advance. A focussed 2-day on-site analysis of the clubs by 2 Double Pass assessors was the second step. By means of interviews with different stakeholders (Academy Manager, CEO, Coaches, First Team Coach, Chairman, Sport Technical Director) the Double Pass model was analysed. Next to that, 3 training sessions were observed. Based on the analysis, an individual report was provided including a qualitative written report of the focused analysis including a national benchmark. Based on the analysis of the 10 clubs, a global report to SFA was provided and presented, containing a detailed view on the Double Pass dimensions.