It is important to state that the implementation of our Double Pass model using our methodology and concept is a reason for success, but not the only one. Recent doctoral research at the University of Brussels showed that an increase in productivity (=own trained academy players transitioning to a professional environment) of a club can be explained for 54% by the criteria of our Double Pass model. The other 46% are non-controllable factors on which one does not have any impact on (e.g. geographic location, culture, economic situation,…).

Knowing this, we have looked at the productivity (and thus return on investment) of an academy from two angles: productivity for the own first team on the one hand, and for other first teams in the German Bundesliga on the other. 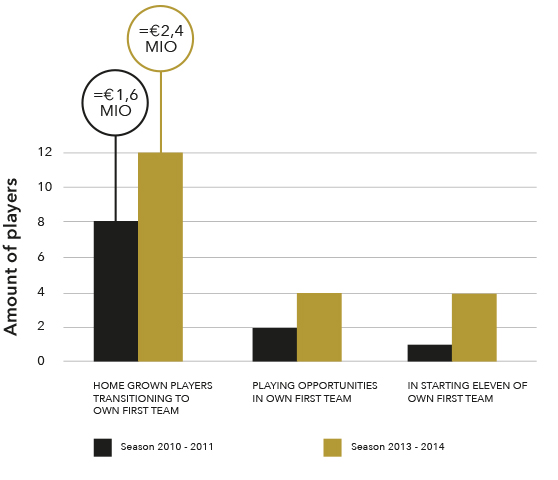 “The graph shows, that many good processes and productivity were initiated by the certification process.”

In this graph we visualise the players that were developed in the Werder Bremen academy and transitioning to the first teams of other Bundesliga clubs. 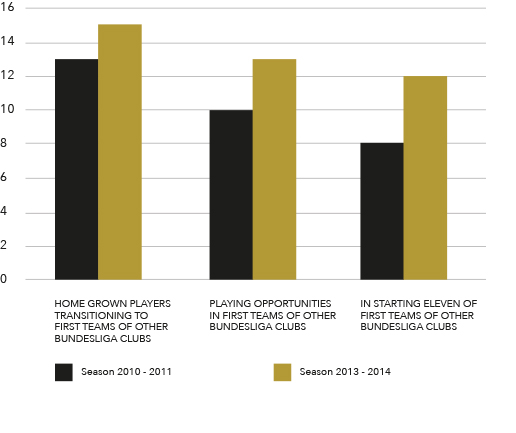 “The productivity to a first team squad is the most important criterium for our youth development! The certification process gives us valuable indications for further improvements in this area.“

We share these data with the permission of the respective clubs.