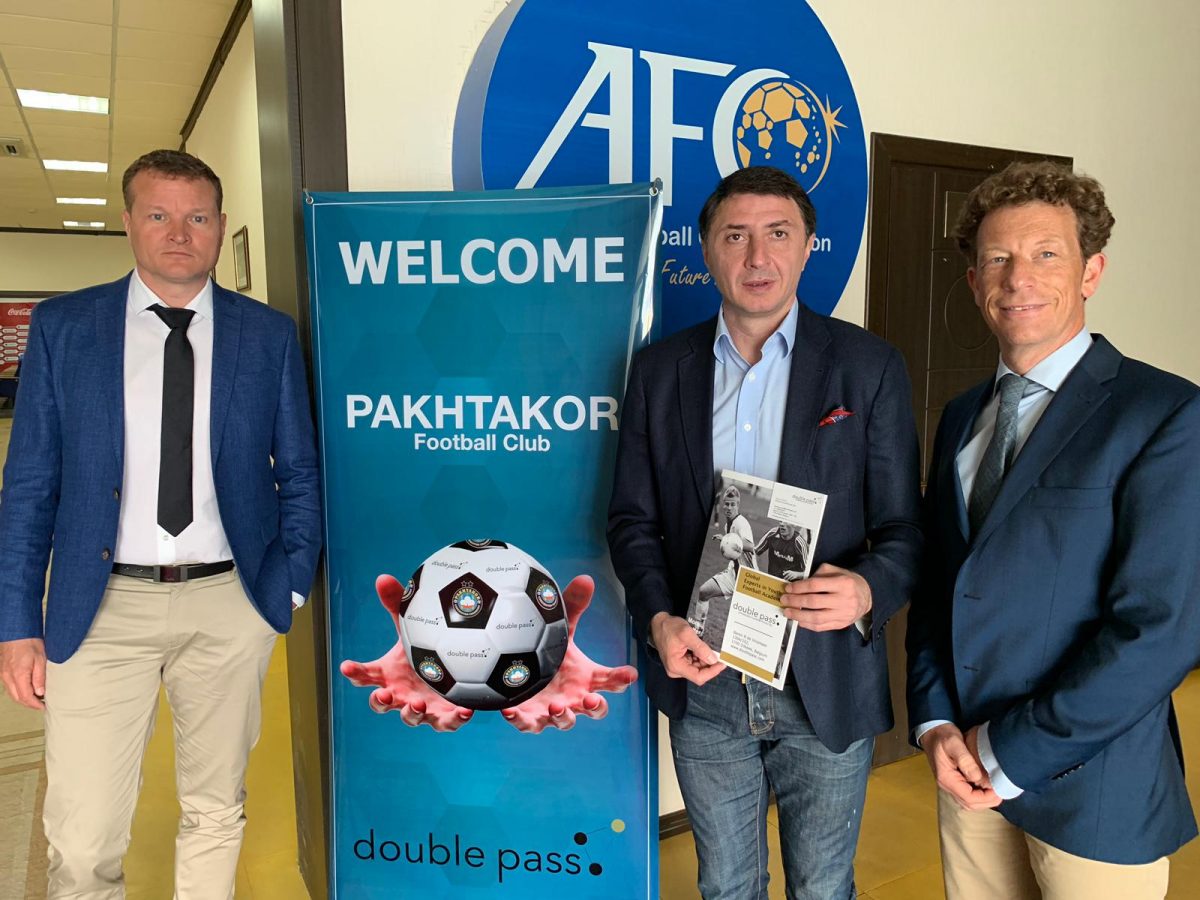 Double Pass signed a consulting partnership with Uzbek professional football club Pakhtakor Tashkent FK. During 10 days, Double Pass will study the way of working and the football philosophy of the club and then convey the first recommendations for improvement. Double Pass is very proud of its first collaboration with a club in Central Asia.

Harvey Arman, director of Asia and Oceania, Jo Van Hoecke, Head of Product & founder and Hans Vander Elst, Head of Football Development represented Double Pass at a press conference with Shota Arveladze, the manager of the Lions at the start of this collaboration.

Shota Arveladze: We have been following Double Pass for more than a year and the fact that today we kick off the project, already shows a great achievement. Our goal is to form Pakhtakor not only as a strong team in Uzbekistan, but also in Asia. Double Pass will assist us with the implementation of the Talent Development Framework to achieve this goal. We are glad that the company’s first steps in Central Asia begin precisely with Pakhtakor.

Jo Van Hoecke: In the first phase we get to know the employees and the trainers. An Academy is considered the future of a club, therefore we will focus on identifying, coaching and evaluating talented players. There are many challenges on the path of the transition of young talents to the first team and we have the expertise to tackle this. Our way of working is not based on just one single system, we take the country, culture, mentality and other differences into account for each project. In the next phase the emphasis will be on the translation of the developed theory to the field.

Hans Vander Elst: Co-creation is our approach, we do not teach how to work. On the contrary, we achieve our success by exchanging experiences. This football philosophy has found its application in football nations such as France and Germany. We are currently applying it in Japan, Denmark and Brazil. I could compare the atmosphere here at Pakhtakor with the Brazilian club SC Internacional. These clubs have a rich history, infused with football. Like in Brazil, Uzbekistan has a lot of talents, people love football, the methods for football development are very similar. Double Pass would like to help increase the number of stars on the Pakhtakor emblem from 2 to 3.

Harvey Arman: I refer to Galatasaray as an example, both the club and the country show many similarities. The last 20 years, with the exception of Arda Turan, they had a hard time developing talented players. DDouble Pass analyzed the Academy and suggested the necessary adjustments. Last year Galatasaray sold 2 players to European clubs. I expect at least the same productivity and success from our collaboration with Pakhtakor.

If you want more information about our co-creation services, you can reach out to: