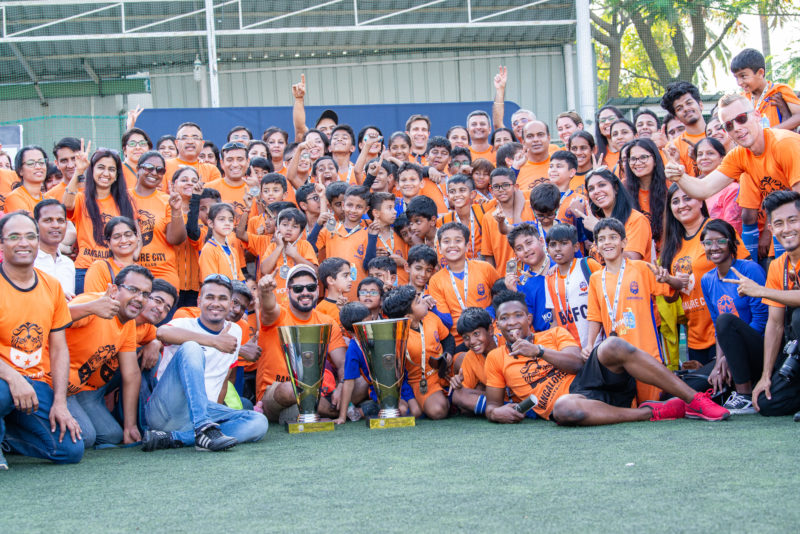 The inaugural edition of Double Pass Development League (DPDL) concluded in grand fashion on Sunday at Kicks on Grass, Bellandur. Bangalore City FC (BCFC) emerged victorious in the Under 7 and Under 9 age categories cheered on by their passionate set of fans and parents, while the Indian Super League club Bengaluru FC’s academy team took home the Under 11 title.

After seven months of action-packed football, the grand finale of DPDL couldn’t have had a more exciting finish! With BCFC making it to the finals of all three age categories Under 7, Under 9 and Under 11 – the DPDL arena turned into a sea of orange as hundreds of BCFC parents and fans thronged the venue. The kids had three magnificent trophies to fight for and the excitement and energy was clearly visible.

It was an electric start to the day as MRUFC took on BCFC in the Under 7 final. In an intensely fought battle, the young lions, as BCFC are popularly called, took the lead into half time through a Neil Nandigam goal while Roaan Sandeep dazzled with his dribbling skills. MRUFC keeper Sankeerth had a magnificent game between the posts as his side dramatically equalized with the last kick of the game through Gagan Sai. MRUFC supporters erupted with joy as the full time whistle blew and the match moved to a penalty shoot-out to decide the winner. The little kids showed tremendous grit under pressure and eventually BCFC triumphed with a 5-3 scoreline.

Next up, BARÇA Academy Bengaluru took on BCFC in a thrilling Under 9 final. Through a brilliant Allen Joshua goal, BARÇA took an early lead but were quickly on the back foot as Saarthakk Taneja hit back with a goal in the 10th minute. Known for their fantastic build up play from the back, BARÇA created numerous chances to score. However, goals from Vivaan Sathyadass and the tournament’s Under 9 top-scorer Yuvan LK propelled the young lions into a 3-1 lead. Although BARÇA hit back with a late strike from Shaun Christy, it only proved to be a consolation.

The Under 11 final between BCFC and Bengaluru FC was perfectly setup as the two best teams from the league stages met once again for an epic clash. The opening exchanges were closely fought, with Bengaluru FC showcasing lightning quick pressing. An astonishing flick and volley of the highest quality from Rayuel Beale gave the blues a decisive lead. With BCFC’s star playmaker Shrestha C tightly marked, coach Rajan’s Bengaluru FC team continued a dominating performance and went onto to clinch the coveted under 11 title with goals from Kanishk Ghosh, Nakul S and the tournament’s top-scorer in this age category Sehajvir Singh.

With 500 kids across 39 teams, DPDL emerged as Bangalore’s biggest grassroots and youth football platform with children playing competitive matches week-in-week-out throughout the course of the season. The tournament accumulated more than 20,000 minutes of active playing time through 500 matches with both league and knockout rounds. During the closing ceremony, it was wonderful to see not just the finalists, but all the participating teams of DPDL turn up to collect their medals of participation.

Chief Guest Gouramangi Singh, a former Indian international footballer said at the closing ceremony – “It’s so heartening to see the turnout today from all parents, coaches and kids. DPDL has provided a fantastic platform to both boys and girls to showcase and develop their skills. I am impressed with the way the tournament has been organized professionally. Its brilliant for the children!”

Recognized by the All India Football Federation (AIFF) as an official ‘Golden Baby League’, DPDL’s objective was to maximize player development by linking learning through competition. Rajat Baid, director of Double Pass India said, “It all starts with meaningful competitive games. Naturally, the more complex match-situations you overcome at the grassroots level as a player, the more experienced a footballer you will turn out to be in the youth stages.”

DPDL has also provided a platform for underprivileged children coming from football hotspots of the city such as Austin Town. These hotspots have a deeply rooted football culture and have historically produced players for the nation. Sarthak Dubey, director of Double Pass India said, “It is fantastic to see kids from Austin Town Indians FC compete on an equal platform with the rest of the children. Their learning experience throughout the league has been helpful to them in so many different ways”.

Double Pass is a global leader in developing quality standards at football academies. It has worked with the English Premier League and German Bundesliga to build football ecosystems that nurture young talent. Double Pass’s unique talent assessment framework will also help Indian football academies improve their quality standards and benchmark them against those of successful academies around the globe. Double Pass CEO & Founder, Hugo Schoukens congratulated and thanked all the DPDL participants, parents, coaches and academy directors for their constant support and encouragement. He also added, “We are convinced we will develop together with you the Eden Hazards, Kevin Debryunes and Romelu Lukakus of Indian Football in the near future”.

Under 7 – Player of the Final – Roaan Sandeep (Bangalore City FC)

Under 9 – Player of the Final – Saathakk Taneja (Bangalore City FC)

Under 11 – Player of the Final – Rayuel Beale (Bengaluru FC)

Under 7 – Emerging Player of the Year – Eklavya Goenka (BBFS Astros)

Under 9 – Emerging Player of the Year – Ritvik Thane (Bengaluru FC)

Under 9 – Goalkeeper of the Year – Neel Kashyap Murthy (Bengaluru FC)

Under 11 – Goalkeeper of the Year – Tanay Salgode (Bangalore Soccer Galaxy)

Under 11 – Top Scorer of the Year – Sehajvir Singh (Bengaluru FC)

Under 7 – Player of the Year – Jordan Mobin Paul (Bengaluru FC)

Under 9 – Player of the Year – Shaun Christy (BARÇA Academy Bengaluru)

Under 11 – Player of the Year – Shrestha C (Bangalore City FC)

Under 7 – Coach of the Year – Vijay David (Bangalore City FC)

Visit our media gallery for more photos of the finals and the ceremony.

If you want more information about our services for Federations and Leagues or about this project, you can reach out to: