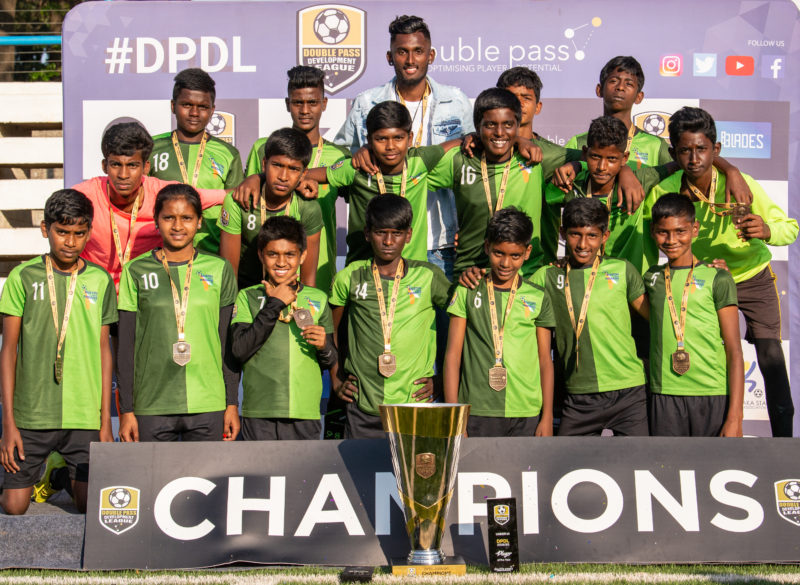 Double Pass Development League (DPDL) concluded its inaugural edition on Sunday at HAL Sports Club with Austin Town Indians and Mahesh Raj United Football Club (MRUFC) emerging as champions in the Under 14 & Under 16 age groups respectively. Both the teams remained unbeaten throughout the campaign and deservedly took home the coveted prize after a four-month long season.

This youth league is an extension of the baby league conducted by Double Pass and creates a progressive pathway for players. With its completion, DPDL is the largest grassroots & youth football competition in the city by engaging 850 kids from 59 teams across 5 age categories and hosting in excess of 700+ matches in a single season.

Shukla Bose, Founder and CEO of Parikrma Humanity Foundation was the chief guest at the closing ceremony and in her address to the participants said “During my growing up years, sports was always kept separate from education but in fact they are integrated and it is in events like these that much more can be learned on a football ground.”

DPDL is recognized by Karnataka State Football Association (KSFA) as an official youth competition. Mr. Shakeel Abdul, deputy secretary of KSFA was also in attendance during the awards ceremony and he congratulated Double Pass for successfully organizing the league and helping young footballers gain much needed game-related development experience.

Sarthak Dubey, Director of Double Pass India said “Lack of competitive games has been an area of concern at the youth level and our objective is to create a strong hyper-local competition structure that maximizes player development opportunities. We are delighted with the number of meaningful games we have been able to provide this season and we will work to take that number even higher in subsequent editions.”

Double Pass is a global leader in talent development and has helped football clubs and federations around the world with their unique framework to build and measure quality standards and benchmarks. Rajat Baid, Director of Double Pass India, said “we are excited about the potential we have in India and we will work closely with clubs and academies to help them develop sustainable ecosystems that nurture talent.

If you want more information about our services for Federations and Leagues or about this project, you can reach out to: